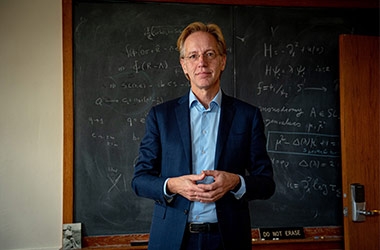 Dijkgraaf Has International Career as Scientist and Professor

Well known Dutch Professor, Dr Robbert Dijkgraaf has become the Netherlands’ new Minister of Education, Culture and Science, and was inaugurated on 10 January. He will serve in Mark Rutte’s fourth government. Dijkgraaf, who is a member of the D66 party, is a professor of theoretical physics at the University of Amsterdam and former director of Princeton University’s Institute for Advanced Study. Previously, he was president of the Royal Netherlands Academy of Arts and Sciences (KNAW).

Born in Ridderkerk in 1960, Dijkgraaf obtained his doctorate in Physics from Utrecht University in 1989, under the supervision of Nobel laureate Gerard 't Hooft. His research focuses on the interface between mathematics and particle physics. Among other honours, Dijkgraaf received the Spinoza Prize (2003), the highest scientific award in the Netherlands, and is a Knight of the Order of the Netherlands Lion. He is also interested in painting, which he studied at the Gerrit Rietveld Academie, in Amsterdam, between 1983 and 1984.

Throughout his career, Dijkgraaf has conducted many activities with the goal of promoting science to broader audiences. Apart from his frequent appearances on television, he writes a monthly newspaper column for NRC Handelsblad and has published several books, also being the founder of the science education website Proefjes.nl. Dijkgraaf’s published works include The Usefulness of Useless Knowledge, a book co-authored with Abraham Flexner that discusses the essential role of basic research and original thinking in innovation and societal progress.

Wittenborg wishes the best of luck to new minister Robbert Dijkgraaf and hopes his term to be marked by important advances in education in the Netherlands.