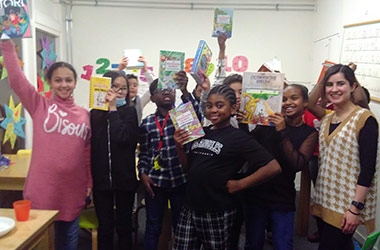 With the goal of helping children of immigrant families improve their English and better adapt to the Dutch educational system, Wittenborg University of Applied Sciences senior lecturer Amy Abdou is conducting a project in partnership with Buurt Talent Ontwikkeling (BTO), a homework support programme based in Amsterdam Zuidoost. Through the initiative, two Wittenborg MBA students and two Vrije Universiteit Amsterdam students participate in weekly one-hour sessions with 20 children between 10 and 12 years old.

The activities include word games, charades and discussions on different topics related to the children’s lives. Recently, the project received the donation of 50 English-language children’s books, after Abdou published a post on her LinkedIn profile asking for contributions. The books were given to the kids as Christmas gifts and, in the near future, the material will be used for reading activities.

Previously, Wittenborg had organised activities such as science & technology workshops and entrepreneurship masterclasses for children at BTO. Apart from helping the kids develop important skills, the overall programme is also related to research that is being done by Wittenborg on innovation in after-school programmes run by social entrepreneurs.

The English-language workshops take place every Friday, from 6 p.m. to 7 p.m. The project is open to new volunteers, and people who are interested in joining can send an email to amy.abdou@wittenborg.eu.

Abdou explained that the children who participate in the project do so voluntarily, stressing that because they come from immigrant families, many speak four or five languages and some already have good English skills. “These kids are really smart and the idea is to prepare them to use the language at a higher level, because after they finish primary school, they will be learning in both Dutch and English. In addition, the project is also helpful for the kids whose first language is not Dutch, because they get the chance to practise with peers who are fluent in it. We are trying to make them see that they are special, by giving them the confidence to speak up and also work on their social skills.”

She added that another benefit of the project is that the children have the opportunity to talk to adults who come from other countries, which considerably widens their horizons. 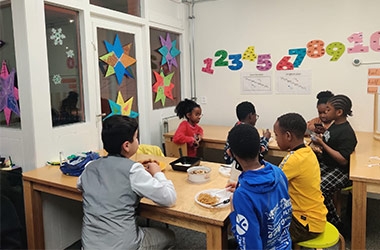 Tina Moghimzadeh, an Iranian MBA student specialising in Entrepreneurship and Innovation, said that she decided to join the project as a volunteer because she wanted to connect with different communities and people. Moghimzadeh mentioned that she had previously done volunteer work in Iran, for an arts & culture non-profit organisation. “I really like volunteer work and I find it very inspiring, because by sharing what I know I feel like I am making a difference. On top of that, I wanted to work with children because they are always happy and positive, which gives me good energy and makes me have a fun time as well.”

According to her, one of the nicest aspects of the project is that it provides multiple opportunities for cultural exchange. “The kids are really curious about Iran and India which is where my friend, who is also a volunteer, comes from. They ask us many questions and also get the chance to talk about their backgrounds, cultures and traditions. We recently had a session in which everyone had to bring a typical dish related to their background and they were really excited about it.