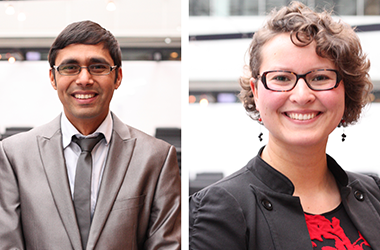 Santosh Aryal to be Replaced by Florian Oosterberg as Student Registrar

Florian Oosterberg has been announced as the new Student Registrar at Wittenborg University of Applied Sciences. She will commence her duties on 1 December 2019.

Oosterberg will replace Santosh Aryal, who joined Wittenborg as a Nepalese student in 2006 and became Student Registrar in 2009. Aryal, who has become a stalwart at Wittenborg through the years and is popular with both staff and students, will leave at the end of November to pursue new career interests outside the Netherlands.

The announcement was made to staff last week by Wittenborg's Executive Board. The chair of the board, Peter Birdsall, said: "We sincerely wish Santosh the very best of luck in his future career.

"Santosh has been at the heart of Wittenborg’s development over the past ten years, moving to Apeldoorn in 2010 with 175 student registrations, compared with the almost 1,000 registrations in 2019."

Dutch native Oosterberg joined Wittenborg in 2014 as an admissions officer, rising steadily through the ranks. She completed a Master in Chinese Studies in 2017 at Leiden University.