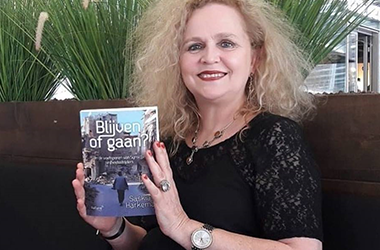 While the world has grown weary of the armed conflict in Syria, for ordinary Syrians the nightmare continues. To revive interest in their plight, Wittenborg University of Applied Sciences’ senior lecturer, Dr Saskia Harkema, has just published a book detailing their struggles – something she hopes those far removed from the war will be able to relate to.

The book “Blijven of Gaan?” (Stay or Go?) tells the story of 7 victims of war and looks at the awful choice they face: Whether to stay and “help” their country, or flee for their lives. You can order it here.

What is the book about and what motivated you to write it?
“The book tells the story of Syria from a very personal experience through the lives of 7 people I met more than 4 years ago through a Dutch NGO, who asked me to teach Syrian freedom fighters in the south of Turkey. We were 10 lecturers, teaching on topics such as Entrepreneurship for the reconstruction of civil society. There I met some of the people I describe in the book and that is where my journey started with Syrians.”

What about them made such an impact on you?
“At the time I had worked for many years with refugees, but never with people who are actually still at war. What touched me is that they said: “The world has forgotten us.” I did not know a lot about Syria, but I promised myself to do something, even though it’s very limited. For many of the people in the book the turning point was seeing someone they know or love being shot in front of their eyes while demonstrating for freedom. You could say they became circumstantial freedom fighters.” 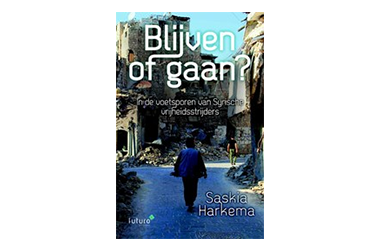 Are they still trapped?
“Most of the people left. That is why the title is called “Stay or Leave?”. It’s a dilemma they are facing. One of them, a pharmacist, died while trying to make his way to Europe. He tried 2 or 3 times through Greece, failed, and then tried through Libya and Tunisia where he died.”

Are they also stories of women?
“No, men. The men always come first. The women come later.”

What do you hope to achieve with the book?
“About 41% of refugees in general suffer psychological problems. In Holland, politicians like Geert Wilders and Thierry Baudet, with their anti-refugee and anti-Islam slogans, create a divide in our society. I hope the story shows this is a human tragedy, and these are victims of war. We should help them.  At a political level we can do much more to end the war. Instead, what we do is close our borders. I traveled all the way to Greece by car to see with my own eyes the refugee route, and it’s devastating. People are being kept in detention centers like criminals.”

If brokering peace is the ultimate goal, what is the interim solution?
“We have to at least fulfil the targets which were negotiated at EU level, namely that each country should accept a certain number of refugees. That is not done at the moment. How can we, who say we uphold values like freedom and solidarity, accept that? I hope my book, by making it very personal, tells their story in such a way that people can relate to it. Building walls is not the answer. I have a friend who lives in Greece, close to the border. She says people are still coming. They are still drowning. If your choice is ‘I die, or I try’, of course you are going to try.”