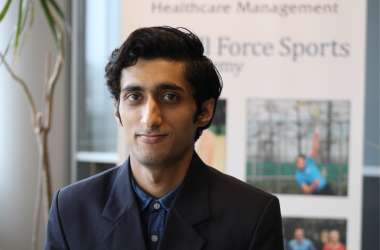 If you think of popular holiday destinations, Pakistan probably does not spring to mind.

However, Wittenborg graduate, Jawaid Waleed, wants to change this. He did research and wrote his graduation assignment on the rise of ethno-tourism in Pakistan - focusing on a small community in the country’s Kalash Valley, who are thought to be direct descendants of Alexander the Great’s army that swept through India around 326 BC.

Although Pakistan is an Islamic Republic, with more than 95% of its population being adherents of Islam, the Kalash have their own religious beliefs, along with their own identity, way of life, and language. They are also noted for their fair skin and blue eyes, leading to the hypothesis that they are of Greek origin.

According to Waleed, who recently graduated with an IBA (Bachelor) in Hospitality Management, the Pakistani government pays scant attention to the Kalash people, missing a great tourism opportunity. “I went there in 2012 and was overwhelmed by the experience. The Kalash have an authentic way of life which makes them different from any other ethno-tourism community in Pakistan.

“However, they need help and the government has a role to play. For instance, the road to the Kalash Valley is in a very bad state, and also the facilities and infrastructure in the community are weak. Furthermore, they are vulnerable in terms of security from the Afghan border.”

Waleed produced a range of recommendations, including what the government can do to promote tourism in the Kalash Valley without compromising the authenticity of the community.

He is not yet sure whether he will stay on in the Netherlands now that he’s completed his bachelor's degree studies. “I have not decided yet.”