Taking your Dutch to the Next Level - in a Week

Taking your Dutch to the Next Level - in a Week 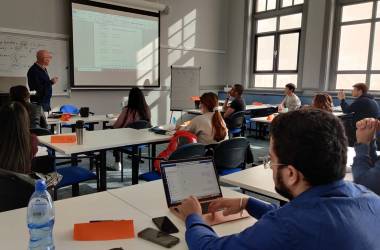 Learning to speak any new language is not easy and Dutch is no exception. The good news is that you can make considerable leaps and bounds in learning if you submerge yourself totally in a language – even for a week. Which is what Peter Saes, Dutch language teacher at Wittenborg University of Applied Sciences, has been doing with the Dutch Intensive Courses he offers 4 times a year. Each course spans a week – from 7 a.m. to 5 p.m.

Saes joined Wittenborg 4 years ago where he teaches regular language classes to both undergraduates and master's students as required. In addition, he also teaches the Dutch Intensive Beginner and Intermediate courses, which were developed by him and focus on participants' speaking abilities. "The more you submerge yourself in a language, the easier it gets, which is why I think focusing on it for a week is so effective," Saes says. 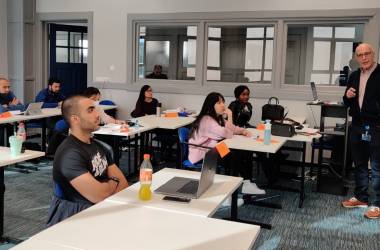 The course remains popular with international students and staff, and the last one in October was well-attended. The next beginner course will be in Week 4 of 2021 and the intermediate course in Week 7.

Aside from teaching at Wittenborg, Saes also runs a language school in Apeldoorn, the Apeldoorns Taalcentrum. He is an accomplished linguist with a master's degree in English and General Linguistics. He also speaks German, French, Russian and Limburgian – Limburg is a Dutch province in the south where Saes was born and which boasts its own language, in the same way as Friesland, another Dutch province in the north. Since his wife is Russian, he is now learning Russian as well.

Despite popular belief, Dutch is no more difficult than any other language, Saes says. "It all depends on how much time you are willing to invest. When I was a child in Limburg, we were always watching German TV-channels as there were not a lot of options in Dutch. Which is how I learned a lot of German."

He also advised internationals to learn as much Dutch as possible if they plan to stay in the Netherlands. "Although the Netherlands is a pretty international country, people appreciate it if you speak Dutch – even when it's just a little bit. It shows you have an interest in their language, in their country. It is also important, I think, in terms of employability."