Amsterdam city council member, Dirk de Jager, recently gave a guest lecture to students as part of the first real-life project of the new academic year at Wittenborg Amsterdam, which centred on City Marketing. De Jager is responsible for the promotion of financial and economic growth as well as sustainability and the circular economy. In a recent article in Bijlmer & Meer, he is quoted as saying that the COVID-19 crisis presents us with the opportunity to restore balance to the economic activity in the city, especially in the southeast part of Amsterdam – which is also the area where Wittenborg Amsterdam is located, in the Dali Building.

In line with Dirk’s proposition, the Project Week focused on bringing tourists to the area to balance the over tourism in the city centre of Amsterdam. Aside from De Jager, there were also contributions by Wittenborg senior lecturer Amy Abdou, who researches subsidised cultural entrepreneurship in the southeast of Amsterdam (Zuidoost) and Dr Isaac Acheampong, programme manager at the city of Amsterdam for the European Regional Development Funds, also a Wittenborg lecturer. 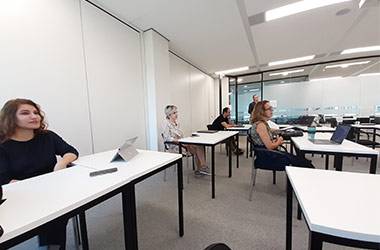 Abdou said: "As many of our students are eager to learn more about local initiatives to stimulate urban tourism, Dirk’s visit has great added value and strengthens Wittenborg’s ties to the community and local government."

In this project week, students had the opportunity to conduct research on consumer patterns of behaviour in local tourism and create policy suggestions that will be presented to Amsterdam city council.

De Jager told students Amsterdam southeast is a very young part of Amsterdam – about 50 years old – with the urban design concept of modernism. He said the area served from the beginning as a place of "arrival" for people from different parts of the world, like the former Dutch colony Suriname and Africa, thereby creating a rich, mixed culture. "At the moment we have about 140 different nationalities here in the southeast of Amsterdam. What is special is that people from so many different backgrounds are able to live relatively peacefully with each other. At the same time, we do have some social problems, which are being addressed by the city with investments."

The area where Wittenborg is located is currently seeing a proliferation of companies setting up, like banks and other financial institutions, which are being based there. "It is interesting that the square kilometre where the banks are located, is the square kilometre where the most money in the Netherlands is being earned. At the moment, we are putting together a city marketing plan for the southeast, because a lot of tourists come here to Amsterdam, stay in the centre, but they don't know this part also exists."