Chinese Student Survives Isolation in Deventer Thanks to Kindness of Others 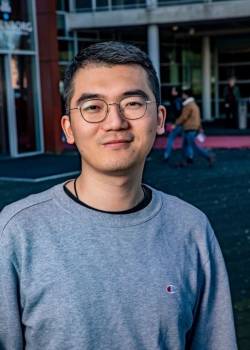 When Chinese student Lee Cui came back to the Netherlands in January after a visit to his hometown, Wuhan, he didn't think twice about quarantining himself for two weeks in his room in Deventer.

The 27-year old Wittenborg student from Wuhan, where the Corona Covid-19 virus first broke out, told his story of living in isolation to Dutch regional newspaper De Stentor. He survived on the kindness of others - a neighbour and friends who made sure he had enough food to eat - and Netflix! "They would deliver my food at the door. I find it really sweet that so many people were concerned about me," he told the newspaper.

His biggest worry was his family and friends back home in China where his mother, an uncle and several aunts work as doctors in hospitals. "When you are locked up in your room, isolated from everyone, you tend to brood over things." Having video contact with them every few days helped. First thing he did after coming out? Buy kibbeling - a much-loved Dutch snack of battered fish chunks

He thinks the Chinese culture of obedience was an advantage in the case of corona. "Everyone followed the instructions of the government, which meant we have been able to contain it to some extent."

Wittenborg CEO, Maggie Feng, said Wittenborg is well prepared now that the virus has also found a grip in the Netherlands. "Currently we are recording lessons, so that classes can be followed online should there be a need for it. Some of our students are currently busy with graduation assignments, but should there be a delay, we are ensuring plenty of opportunity to retake."