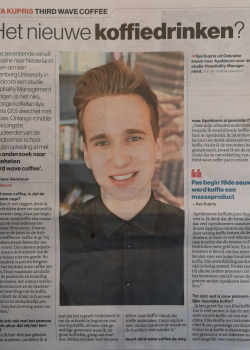 "No One Should Add Sugar to their Coffee"

Wittenborg graduate Ilya Kupris chose such an interesting topic for his graduation assignment that the results of his research have been picked up by a regional Dutch newspaper, de Stentor.  Kupris (20) looked at how the so-called "third wave of coffee" has impacted Apeldoorn. Naturally, this meant visiting several coffee houses in the city, interviewing baristas as well as owners and drinking a whole lot of coffee.

The third wave of coffee is a movement to produce high-quality coffee. It considers coffee an artisanal food, like wine, rather than a commodity. This involves improvements at all stages of production, from improving coffee plant growing, harvesting, and processing, to stronger relationships between coffee growers, traders, and roasters, to higher quality and fresh roasting, at times called "microroasting" (by analogy with microbrew beer), to skilled brewing.

Kupris, from Ukraine, also carries the distinction that at 19 he was the youngest graduate ever at Wittenborg University of Applied Sciences. He graduated with an IBA in Hospitality Management and received his diploma on 12 July.

As a big coffee fan, Kurpis says he was happy to discover that the Dutch typically start their day with coffee. What impressed him less was that most people seem to get their coffee from an automated machine. "That's a shame since most of the taste and quality get lost."

His research showed that the development of third wave coffee is only practised by a few coffee houses in Apeldoorn. "I think being stuck in a certain routine leads to few people drinking coffee outside their homes. You also have to take into account that this new way of drinking coffee is pretty expensive. So it will take some time for the trend to move from the big cities to places like Apeldoorn."

What is his favourite coffee? "I love filter coffee with coconut milk. And no one should add sugar to their coffee."