Wittenborg Looks Towards Collaborations with India 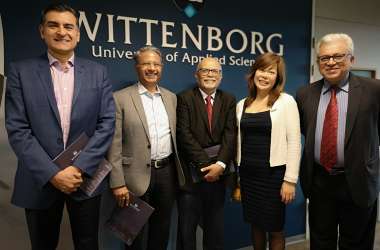 Wittenborg CEO, Maggie Feng, has had a preliminary meeting with Good People Consulting, an Indian talent acquisition group which provides business solutions in the field of human resource management, to discuss collaboration opportunities with Indian institutions.

The group was led by Good People Consulting managing partner and CEO, Amal K. Das. He was accompanied by director, Ashwani K. Dhaul, and regional director, Vikas Verma. Also in the group was the executive vice-president of the Netherlands India Chamber of Commerce & Trade (NICCT), Rajiv Mehra, who is also a member of the board.

Feng said there are many similarities between the Netherlands and India, such as the job market, the emphasis on new technology, engineering and artificial intelligence (AI). At last year's Tech Summit in Bangalore, the Dutch consul-general, Gert Heijkoop, told the India Times that the Netherlands has a deficit of engineers and there is an immense opportunity for Indian engineers to bridge the talent gap in Holland.

Good People Consulting already have alliances with universities and other institutions in India and provide services such as placement of students in various industries, providing internships in the corporate world and taking industry projects to campus.