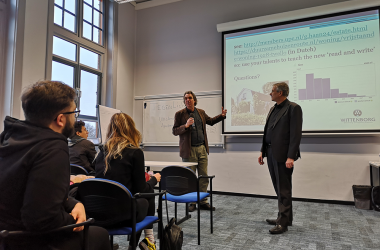 "You can take control of your destiny as an individual in relation to climate change."

Want to go greener at home? Recently, Wittenborg students got a first-person account from MBA lecturer, Dr Geert de Haan, about how he made his own home more eco-friendly and started living a greener life. De Haan gave a presentation to students in the run-up to their participation in the MIT World Climate Change Games.

“I hate waste,” is the simple explanation De Haan offers as motivation for his efforts. He twirls in front of the 140+ students who signed up for the Project Week to show off his clothes – all bought from a popular second-hand shop chain in the Netherlands called Kringloopwinkel, a place where Dutch people take their old stuff – not to die, but to be sold on at bargain-basement prices with a new lease of life.

“Everything I’m wearing I bought at Kringloop - except my underpants and socks,” De Haan says. "After oil, the clothing industry is the biggest polluter in the world. Why waste when one can recycle? It's cool, hip and good for the environment." 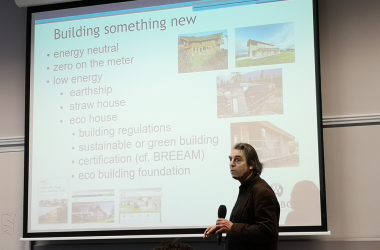 Some of the measures he suggests for living a greener life are simple - like taking an airplane trip only when absolutely necessary. Others are more controversial, such as all of us having fewer children. “Make love, not babies,” De Haan told students.

When he and his partner – who think of themselves as post-materialists – moved into their home in 2010, it was a nice, old house with a big vegetable garden, but a high energy bill. One of the first things they did was to renovate the roof and install 7 PV solar panels. By 2013, they had installed 7 more, built an ecological wall, installed underfloor insulation, and their gas bill went from €220 to €0.

Besides growing most of their own vegetables, the couple also went about redesigning their entire garden so that it does not need any watering and also removed the garden surface. "Instead of grass, we have rocks in our garden." Rain water is also used maximally in the household," De Haan said. "We have a water-saving shower head, use rainwater barrels, and separate rain water from sewage."

As far as transport goes, the couple only fly when absolute necessary. "We use the train and have lots of bicycles and a tiny car for moving heavy loads." They also separate their waste, keep a compost pit which they use as fertiliser, and have managed to reduce their residual waste to only one container a year!

De Haan said he wanted to show students how one can, as an individual, take control of one's own destiny in relation to climate change.