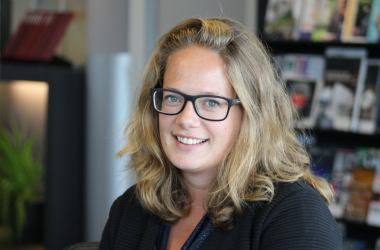 Sannne de Jong has been appointed as the new Student Career Counselor and Alumni Office Manager at Wittenborg University of Applied Sciences. She will also be the facilitator between companies and students for internships.

De Jong joined Wittenborg in 2016 as Human Resource Officer but her ties with the organisation go way back. Fresh out of high school in 2003, she started at Wittenborg as housing officer when it was still located in Deventer.

Next to Student Career Counselor, de Jong will henceforth also be the coordinator between students and companies with regards to internships, taking over from lecturer Bert Meeuwsen  as Work Placement Coordinator.

De Jong said she is excited about her new role.  “We would like to take our alumni network to the next level – build up a solid network and put new energy in our current networ. Wittenborg has six entry dates per year, which also means six graduation opportunities so we have many new alumni every six weeks. We want to create one platform for all of them,” De Jong said.

Wittenborg has taken the first steps in gaining accreditation from the Association of MBAs (AMBA) and according to De Jong, a solid alumni network is one of the pillars of AMBA accreditation.

As far as career counseling goes, De Jong will dispense advice to international students on matters such as navigating the Dutch labour market and the necessary soft skills needed, whether in terms of internships or finding a job after graduation. “Many students are interested in staying in the Netherlands after graduating. Our external network can be a valuable resource for them.”

Students in need of career counseling or interested in joining the alumni network can email De Jong at externalrelations@wittenborg.eu.