Future of International Classrooms Discussed in The Hague 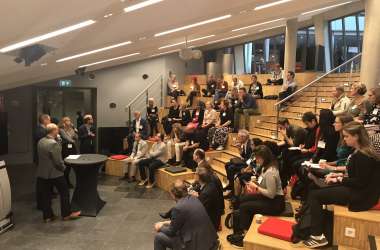 Balancing International Classrooms in the Netherlands

Stakeholders in the Dutch higher education sector met in The Hague on Wednesday (10 October) for a seminar on the future of international students in the Netherlands.
Heated debates on the admission and selection of international students have been raging in the Netherlands in recent months. Participants will be asked to ponder questions such as how you balance an international classroom within the current policies and laws governing universities and universities of applied sciences.
“It has been five years since the Dutch government implemented its Modern Migration policy. Is it time for a discussion on how well this policy works in practice? What considerations should be made in this respect?” the invite to the seminar read.
The themes that were discussed included regulations contained within the Code of Conduct itself regarding admission of international students to bachelors and masters programmes in the Netherlands.
Many research universities, especially in Amsterdam and Rotterdam commented on the excessively large numbers of international students entering their undergraduate programmes this year. Participants debated that that they were not fully able to control entry through selection, and that possibly higher fees might be needed, or other measures.
Participants discussed whether or not the IELTS requirement for international students (currently IELTS 6) should be raised. Also, the (immigration) requirement for international students to achieve at least 50% of the required credits in a year was open for discussion with many institutes saying that this was outdated by other regulations, now contained by the Act of Higher Education (the so-called Binding Study Advice).

Wittenborg University of Applied Sciences was represented by the chair of the executive board, Peter Birdsall. The seminar was organised by the National Commission of the Code of Conduct in Higher Education, Nuffic and the  Kommissie Buitenlands Studerenden.

Every Dutch university Board Member to assist in the supervising of international students!

One of the discussion statements during the day was the concept that every university board member in the Netherlands should be made to assist in supervising at least three students. The idea was met with some scepticism as well as jokes, however Birdsall commented that at Wittenborg board members are often involved in the coaching and mentoring of students who are in some