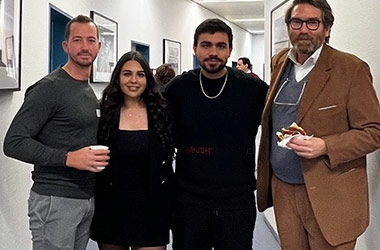 In partnership with the American-German Business Club (AGBC), Wittenborg’s Munich study location offered a special activity for its bachelor’s and master’s students. On 23 April, the school hosted the 17th AGBC annual exchange event, which included workshops delivered by nine guest speakers on topics such as education, marketing, psychology, technology and entrepreneurship, among others.

By attending the event, the students were exposed to new ideas and also had the opportunity to network with academics, businesspeople and entrepreneurs. During the workshops, participants engaged in various interactive activities, such as drawing exercises connected to body language and virtual reality trainings designed for health professionals.

According to the director of Wittenborg’s Munich study location, Sascha Liebhardt, one of the activity’s main goals was to help students develop their networking skills. “In order to network, students need to be able to walk up to strangers and introduce themselves, and most are not used to doing so. At this event, participants had the chance to have their first contact with businesspeople, and the American-German Business Club members are really open and friendly, so that helped our students overcome that threshold,” he stressed.

Liebhardt pointed out that this is the fifth time that the two institutions have co-organised the annual meeting, and added that the event provided a great atmosphere, including plenty of delicious food. “The students were completely engaged in the activities and all of them thanked me after the event was over. In addition to that, I always do a shout-out at these events, letting people know that we want guest speakers and faculty members for future events, and three of the speakers have offered to become regular guest speakers.” 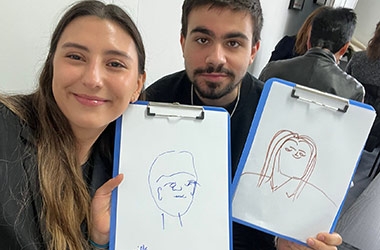 Bachelor’s student Ariela Carreno, specialising in Marketing & Communication, said that she really enjoyed participating in the activities and mentioned that the event was a great opportunity for networking and learning concepts that are not necessarily addressed within academia.

“I went to three presentations which were all very interesting and centred on different topics; it was nice to be able to decide which one to go to instead of being assigned to one. The activity I liked the most during the presentations was learning how to do a quick sketch of another person, because it was the most interactive one.

The president of the American German Business Club, Constanze Sabathil, said that she was really satisfied with the outcome of the activities, adding that AGBC’s Munich Exchange is one of the organisation’s most important events. “It was a true joy to see so many people in person, to listen to all these wonderful ideas, passions and projects, and to experience an event that is so full of good spirits. I am already looking forward to next year’s edition.”