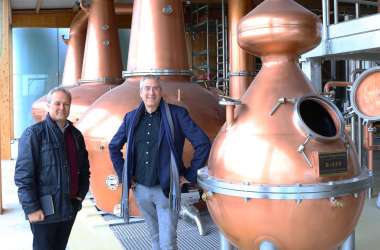 I recently had the pleasure of accompanying my cousin, writer and artist Ben Birdsall, as he travelled to Ireland to do some last-minute research for his new book: "Whiskey Burn – the Distilleries of Ireland by Vespa". It is shortly to be published by Wittenborg University Press, as a sequel to his first book on Scottish distilleries.

The day began with a visit to the start-up distillery of Boann, situated outside of Drogheda just north of Dublin. This Irish whiskey distillery is a family-run business, which uniquely combines cider making, a beer brewery, and a distillery, as well as plans for foreign production. We were given a tour by Boann's head of marketing and sales, co-owner Peter Cooney, who brought us up to date on developments.

They have made considerable progress since Ben’s visit during his "Whiskey Burn" Vespa trip in the summer of 2017, although the actual production of Whiskey is still some way off.  It was fascinating to see how the distillery was being constructed and wired-up, and how the piping was being connected.

They are hoping to start testing the stills in the summer and production should start in the autumn of 2018. Irish whiskey takes less time to mature than its Scottish counterpart, so the first bottles of Boann-made whiskey should be on the shelves by 2021. Boann already matures and markets outsourced whiskey under the "Whistler" label.

Beer production started two years ago and their ‘craft’ beers have already won some major awards this year. To follow the progress of Boann Distillery check out their website at http://boanndistillery.ie/<> 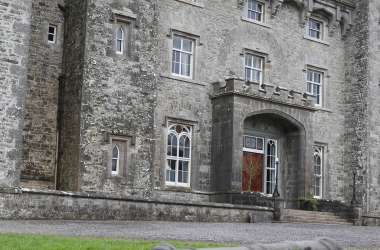 In the afternoon, we were treated to a meeting with the entrepreneurial Earl of Mount Charles, Alex Conyngham, who went through the engaging story behind setting up Slane Distillery.

Uniquely, the distillery is situated in the grounds of a historic castle, Slane, set in a natural amphitheatre that in recent years has been the setting for outdoor rock concerts, hosting legendary bands such as U2, The Pogues and Red Hot Chilli Peppers.

Apart from taking the time to review the facts and figures of Ben’s manuscript where he describes the distillery, the earl joined us in a "dram" of his own whiskey, after taking the time to give us a personal tour of this already producing distillery. Slane has a very clearly defined product, and through a $50 million partnership with U.S. drinks giant Brown-Foreman, makers of Jack Daniels, they have been able to commence production without delay.

When Ben visited last summer, the place looked more like a building site, but Slane has now developed the added-value business diversity such as deluxe tasting rooms, a reception bar and whiskey education centre. Both castle and distillery are open to the public, and now that the distillery is up and running and offering guided tours, it makes a great day out for families, or a prime location for companies and businesses to hold events. 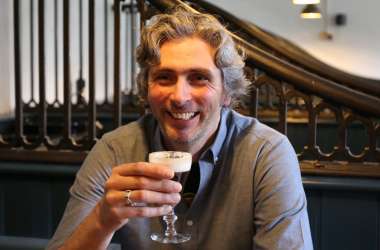 One of a kind

I think Slane is a one-of-a-kind whisky distillery, and its family-run business model is extremely interesting. The character of the place is imposing, with the castle and its long, aristocratic history, the rock festivals they organise (which somehow characterise the distillery itself), and the very nicely designed manufacturing buildings, all going together to make Slane unique.

It is certainly very much worth visiting, and you can check-out their website at https://www.slaneirishwhiskey.com

Thanks to both companies for providing Ben and me with truly wonderful insights into their fascinating businesses.

Peter Birdsall Chair of the Executive Board