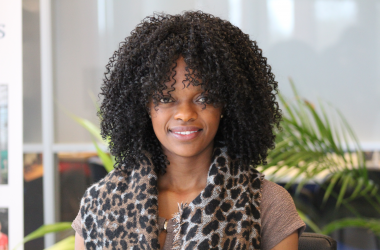 Pro-active Wittenborg Student, Witney Laizer, has just been picked as student ambassador for Study in Holland

Wittenborg is proud that one of its students, Witney Laizer, has been chosen as a student ambassador for Study in Holland!

Witney, who is from Tanzania, received the good news last week from Metcheld Bous, communications officer of Nuffic: Student Team Mobility. Last month, Nuffic put the word out that they were looking for student ambassadors who love blogging, vlogging and sharing stuff on social media like Instagram, Snapchat and YouTube. The call was also posted on Wittenborg’s Facebook page.

Meanwhile Witney – who has adopted a pro-active approach ever since she joined Wittenborg – has approached several people at the institution, including the chair of the executive board Peter Birdsall, for opportunities to get involved with student activities. Her hard work paid off as the admissions officer referred her to Nuffic.

Her duties as student ambassador would include taking over the Study in Holland Instagram and Snapchat accounts on a regular basis and to provide content. For instance, vlogging about student life in the Netherlands.

Witney is currently doing an IBA in Economics & Management at Wittenborg. In her free time she also works as a model for African-inspired clothing brand We Be Sisters. About her new role she says: “It felt great to receive the news of my ambassadorship. So far, the response from my fellow students has also been wonderful. I am excited to take this on."

And her advice for other students? “Instead of waiting for opportunities to come your way, you should go look for them. Even if you start small, don’t be too picky!”

Related Content
Wittenborg Students
Study in Holland
We Be Sisters