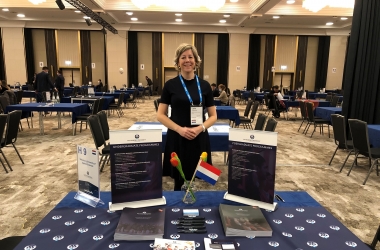 Lena, who will Be Pursuing a New Venture, will Be Missed by Wittenborg Colleagues

After five years of fruitful collaboration, the Wittenborg family says goodbye and wishes the best for International Partnership Manager Lena Vandenbosch, who will be pursuing a new venture in the consumer goods industry from now on. Lena, who was born in the Netherlands but has also lived in Australia, New Zealand, Mexico and Spain, obtained a master’s degree in International Business from the University of Maastricht and also completed an MBA degree at IE Business School, Madrid. Prior to joining Wittenborg University of Applied Sciences, in January 2017, she already had a long track record in the fields of sales & marketing and higher education.

At Wittenborg, Lena was initially a Sales & Marketing Officer before becoming the institution’s International Partnership Manager. In this role, she supported the recruitment of international students through a network of representatives from all over the world. Besides that, she was an active member of the Events team and collaborated with the Marketing team in the creation of promotional materials and content for the website.

According to Lena, one of the most rewarding aspects of her job was when she would receive the first student application from a new representative, which would then turn out to be the first of many to follow. “It was also wonderful to see how these applicants actually became our students and to watch how their journeys at Wittenborg unfolded. Another aspect I really enjoyed was the various business trips I had the opportunity to go on, which made it possible to network with professionals from the industry,” she adds.

In her view, the most challenging time at WUAS was when the pandemic started and the whole team had to fully migrate to an online working environment. “But with the team being so tightly knit, those challenges were overcome together and we quickly found new ways to effectively work as a team,” she stresses.

Lena says that Wittenborg has grown considerably since the time when she joined it. She highlights that, within the Admissions & Registry Department, the student recruitment journey has become more transparent, professional and streamlined, and also points out that the number of students recruited through the network of representatives has expanded significantly and become more diverse. 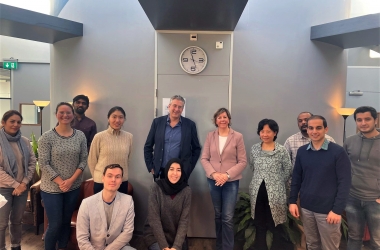 Admissions Administrator Mykhailo Huba describes Lena as a reliable and life-loving colleague, mentioning that one of her best characteristics is the fact that she can be at the heart of any conversation or meeting. “I believe that this is one of the major reasons why she was good at this job, since her position implied a lot of meetings and conversations with agents and student representatives all over the world. I worked closely with Lena as an admissions intern and later administrator, and she was very helpful and provided me with valuable guidance. She is a very trustworthy colleague, and I will surely miss her.”

Student Registrar Florian Oosterberg said that she loved the fact Lena did not shy away from a discussion and would ask the hard, critical questions. “With a good dose of humour and a critical eye, she greatly contributed to improving our education consultant system and network, paving the way for future developments.”

Asked about what she will miss the most from Wittenborg, Lena says that it will definitely be her colleagues, mentioning that she loved working in such a diverse and multicultural environment. “The team’s continuous support, accepting nature and shared sense of humour made Wittenborg a great place to work. I would like to thank the whole staff for the memorable past five years, it has been an enriching experience and I have loved getting to know you all. I will really miss the daily laughs and I am grateful for all your support, and wish you all the best of luck for the future. Stay in touch!”