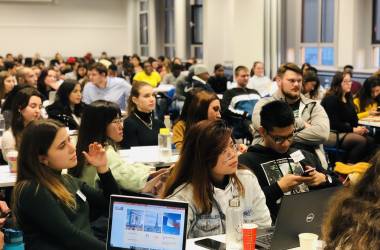 Fear of Unemployment Higher than Fear of Terrorism, Climate Change, War or Racism

Being jobless in the future seems to be the biggest worry for undergraduates, a quick survey among 170 international students at Wittenborg University of Applied Sciences has revealed. Fear of unemployment outranks the fear of terrorism, climate change, war, racism or even debt.

Wittenborg's Vice President Academic Affairs, Professor Dr Ron Tuninga, said the results show the importance of a great education followed by great job opportunities. Job worries topped concerns over the economy, then came terrorism, climate change and war. On a list of 10, students were the least worried about intolerance.

The survey was done during Wittenborg's Model United Nations (MUN) assembly this week which focuses on ethics in business, politics and governance. MUN is an academic simulation of the United Nations. Students play the role of delegates from different countries and attempt to solve real-world issues with the policies and perspectives of their assigned countries.

When asked what they thought were the biggest challenges for their generation, students listed "climate change" as the top challenge - followed by the ability to maintain global peace, international financial crime, racism, drugs and corporate power. Students saw the rising influence of China as a bigger challenge than the US government. Eight students see older generations as a challenge, and another 5 also listed aliens from outer space as a threat.

Students were also asked what they saw as the United Nations' biggest task for the next 50 years. Top of the list were maintaining international peace and security, to coordinate the fight against global warming, and to be assigned more power as a global government.