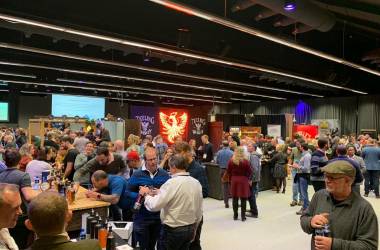 Whiskey Burn at Dublin WhiskeyLive '19 - and the 'Mystery Whiskeys' Revealed

Last year, Wittenborg University Press book Whiskey Burn - the Distilleries of Ireland by Vespa was launched at Whiskey Live in Dublin Castle, Ireland. They sold out of books at that event, and this year the book’s author, Ben Birdsall, returned with Wittenborg's Chair of the Board, Peter Birdsall, with their own stand to test the market. 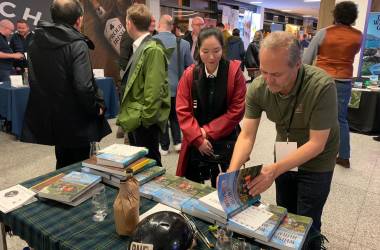 The Whisky Burn books are Ben's study of the state of the whisky distilling industry by journeying around on his classic Vespa 50. With every copy sold of either Whiskey Burn or the first volume, Whisky Burn (about the Scottish distilleries), free samples of ‘Mystery Dram A’ and/or ‘Mystery Dram B’ were offered on the night.

Ben was delighted with the reception of his book again. “Dublin WhiskeyLive is without doubt the biggest Irish whiskey event of the year,” he said. “It was great to meet up again with some of the characters who actually appear in the book, like Eric from Midleton, who hosted the tastings that night on Cape Clear Island in Chapter 2, chief distiller Ned from Waterford distillery, Peter Mulryan, who had gone home and closed by the time I got to his Blackwater distillery, legendary distiller Noel Sweeney of Powerscourt, and John Teeling, ‘father’ of the Irish whiskey renaissance. 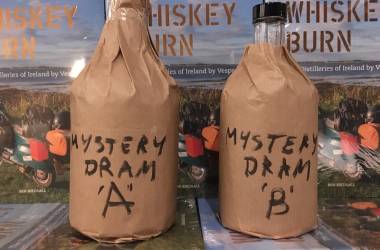 “But besides socialising and networking, WhiskeyLive is also a marketing event, and some of the most special and latest offerings from the Irish distillers were on offer. I was able to talk to the people who bought my books and they told me about their own experiences of the whiskey trail, and I spoke to people who had bought books in the past with valuable feedback. Tina, from Germany, even came with her own copy she had bought online to get me to sign it!”

Press and bloggers were there; Ben was interviewed by Youtube vlogger WhiskyJason for his channel, and Serghios Florides, editor of Irish Whiskey Magazine, confirmed the entry of his article on how Irish Whiskey is viewed from Switzerland, to be published in the next edition. And, of course, they managed to sell quite a few copies, and so poured plenty of mystery drams.

The event had been sold out for weeks, and the exhibitor stands for months. Organisers, Celtic Whiskey Shop, found themselves turning distilleries away. Next year, WhiskeyLive is going to move to a larger venue, and Whisky Burn plans to be there.

And the identities of the mystery whiskeys?
Follow this link to the article on Ben’s website to find out (and order your own copy for Xmas ...):Whiskey Burn at Dublin WhiskeyLive19 - and the 'Mystery Whiskeys' Revealed