Wittenborg in Moscow to celebrate 10 years of Nuffic Neso Russia 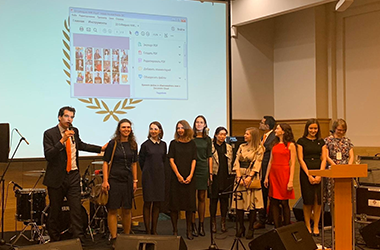 Wittenborg spent the day in Moscow to celebrate 10 years of Nuffic Neso Russia, and strengthen ties with Russian partners.

Wittenborg helps Neso Russia celebrate its 10th anniversary in Moscow, whilst strengthening ties with its partners in Moscow.

Yesterday saw around 15 Dutch research and applied science universities join the Nuffic in Moscow to celebrate the 10th anniversary of the Netherlands Education Support Office (Neso) in Moscow. 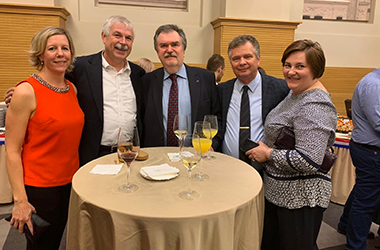 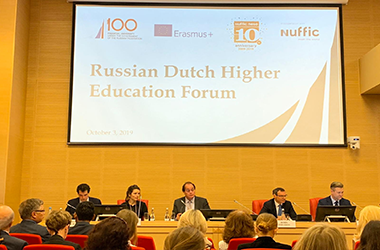 Nuffic at the Financial University

Wittenborg neighbour, Saxion's head of the international office, gave an overview of Dutch Higher Education, following on from the review of the Russian Higher Education Landscape by Olga Oleynikova, director of the Erasmus+ programme in Russia.

During the forum, Nuffic director general, Freddy Weima could not avoid spending a moment to highlight the current Dutch government policy regarding funding for the Nuffic and its Neso's, that are all threatened with closure. He received much support from all the Dutch universities present at the event. 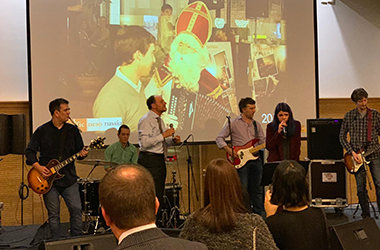 During the afternoon sessions, at the Higher School of Economics, Dutch and Russian academics discussed entrepreneurship in higher education, and digitalization as a strategy.

The day ended with a reception that saw members of the Neso Moscow team, led by their current director Jerke Verschoor, look back on a successful 10 years of partnership building between Dutch and Russian higher education institutions. He was supported by the first director of Neso Moscow Charles Hoedt (now at Neso Beijing), the Dutch Ambassador in Russia and Nuffic's director general Freddy Weima, who took to the stage to perform, singing with a local rock band led by a former student who had studied his PhD in the Netherlands.

According to Wittenborg's President, Peter Birdsall, "the Russian partners cannot believe that the Dutch government is planning to scale back its Neso operations, and actually even the Dutch embassy representatives didn't seem aware of what is possibly planned. I think overall the Neso has to be credited for its promotion of bi-lateral partnerships, and that the notion of closing the Neso in order to reduce the numbers of international students in the Netherlands should really be re-assessed by the government."