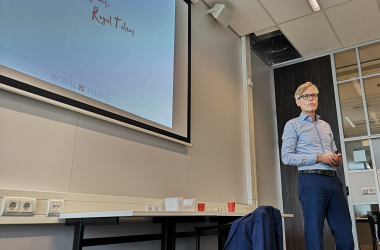 Wittenborg students heard how a simple shift in communication led to phenomenal growth at an international company based in Apeldoorn, Royal Talens, which is celebrating its 120th birthday this week. The company specialises in producing paint for fine art around the world and also hobby materials.

Royal Talens’ export manager, Andries Grul, told students that a few years ago he started having quick meetings every single morning with all his staff face-to-face as well as weekly meetings and checking up on their well-being. A month later sales started increasing -  and growing ever since. Grul was the guest speaker for IBA students on the topic of Change Management in Corporate Entrepreneurship on Monday. "We want to get the best service for our customers, so those daily meetings paint a good picture to everyone about what's going on, why there are delays and how to fix them. The meetings range from 5 minutes to 55 minutes. In the beginning some people were really annoyed because they can be time-consuming, but in the long-run we saw the benefits. And more importantly, the customer gets the best service. We also don't speak of 'customers', but rather refer to them as 'business partners'." 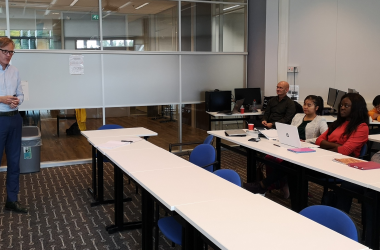 Grul delighted students with the story behind how this brush with fame came about, saying they had no idea their paint was being used for the movie until they started noticing sales for their “Van Gogh” oil paint soaring. “The director of the movie said of all the paints they tested, ours was the best for the purposes of the movie – especially the yellow.” The colour yellow features prominently in Van Gogh’s paintings.

Aside from the movie, Royal Talens has over the years provided paint for lots of famous artists, like Damian Hirst and many members of the Dutch Royal family.

Keeping customers satisfied stands at the core of Royal Talens’ success, Grul said, explaining how relations with customers are kept intact and making sure they excel in service delivery.

It may be 120 years old, but Royal Talens is also moving with the times. Grul said social media is growing part of their marketing strategy. “We do for instance use influencers. Many artists have huge followings on social media. Some of them also act as our ambassadors.” Asked whether the company pays influencers to promote them, he said: “Yes, but not in money.”