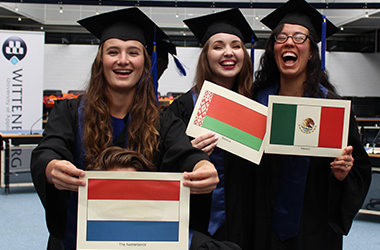 New statistics from the Dutch Central Planning Bureau (CPB) has revealed that international student contribute thousands of euros to the Dutch economy. This puts paid to the  idea that foreign students are a huge financial burden to the Netherlands.

Meanwhile, Wittenborg University of Applied Sciences - which is one of the most international institutions of higher education in the Netherlands - has made its own calculations. Wittenborg's chair of the executive board, Peter Birdsall, estimates that students have added about 88 million to the city of Apeldoorn in main and the Dutch economy in general since its move from Deventer in 2010.

"We have always used the calculation that on average one student contributes about €18 000 per registered year to the Dutch economy, and a lot of that goes to the Apeldoorn economy. Think of expenses like accommodation, salaries, shopping etc. This does not include the fact that many students work, thus also contributing to the economy in that sense. Since 2010 we have had an approximate total of 4934 student ‘year registrations’ and 2019 is not yet finished, hence the approximate."

Birdsall says Wittenborg expect to generate around €20 million per year towards the economy, adding up to around 200 million over 10 years.

The Dutch Minister of Education, Ingrid van Engelshoven, is expected to send a letter to the Dutch House of Representatives (Tweede Kamer) outlining the future of internationalisation after lots of controversy about the number of foreign students in the Netherlands and the increase of English language programmes.

Last year about 85 955 international students came to study in the Netherlands, making up 11,5% of the total student population. Compare this to 2006 when the number was around 31 000.