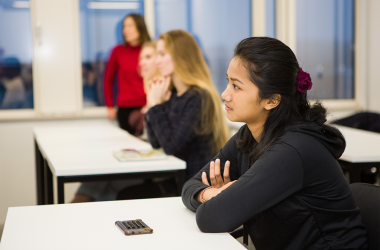 Wittenborg University of Applied Sciences is calling on the Dutch Inspectorate of Education to evaluate the way agencies recruit international students for transition-year programmes, which eventually win them a place at Dutch universities, questioning whether that place is legitimately earned. Wittenborg has uncovered that international students are being 'fast-tracked' into research universities, not having a qualification that is equivalent to the national requirement.

Wittenborg’s chair of the executive board, Peter Birdsall, said WUAS management has written to the Ministry yesterday. In the letter Birdsall raised his concerns, that were also previously published in  'Onderwijsblad', a publication of the AOb, the Netherlands’ biggest teachers' union.

It is also feared the way British and Australian recruitment agencies Oncampus, Study Group and Navitas operate will lower the quality of Dutch education by allowing students who do not meet the national entry requirements a back door into research universities.

Agencies allegedly recruit international students who do not qualify for admission to Dutch universities, offering them a costly “transition year programme”, which is then taken care of by the agencies themselves. However, to comply with the requirements of a study permit, students are registered at partnering universities.

Among them are students who do not have the equivalent of a VWO diploma – the general criteria for admission to a research university in the Netherlands, which is equivalent to the three A levels required for entry into UK universities. Birdsall is of the opinion that this means Dutch students, who do have to adhere to the criteria, get the short end of the stick. In a previous letter to the Dutch ministry of Education, Birdsall called it a “disregard for the Dutch binary system in higher education”.

According to the article in the AOb publication, the agencies are currently offering these transition programme students to five research universities and three universities of applied sciences. "..for instance, they recruit Chinese, Russian or Indonesian students for  whilst the high school diploma in these countries only meet the HAVO level, which is not eligible for entry into a research university. That can damage the reputation of Dutch higher education," Birdsall said.