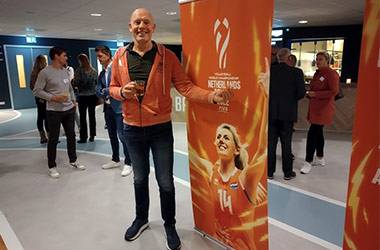 From 23 September to 15 October, 2022, the Netherlands and Poland will be hosting the 2022 FIVB Volleyball Women's World Championship. It is the first time this major sporting event comes to the Netherlands. Apeldoorn is one of the three Dutch cities in which games will take place, which are expected to draw a combined 200,000 spectators. Apeldoorn will host two quarter-finals and one semi-final.

The FIVB Volleyball Women's World Championship, in which the women's national teams of countries from around the world compete every four years, is the most prestigious tournament in women's volleyball. It can be seen as volleyball’s equivalent of the FIFA Women's World Cup.

On 27 September, a kick-off event for 2022 FIVB Volleyball Women's World Championship took place in Omnisport, the state-of-the-art velodrome and multisport indoor arena in Apeldoorn, which will also host the games. It was an opportunity for local entrepreneurs, foundations, and clubs to not only receive information about the event, but also to network.

Omnisport, which opened in 2008, previously hosted events such as the 2015 Women's European Volleyball Championship, the time-trial stage of the 2016 Giro d'Italia and the 2018 UCI Track Cycling World Championships. It is also the home of SV Dynamo, an EV Champions League-level volleyball team.

A Chance to Get Involved

Wittenborg's own Getjan Lammers attended the kick-off event. He highlights the many opportunities that residents of Apeldoorn – including Wittenborg students – will have for getting involved in the tournament itself and the many related events that will be hosted before and during the tournament. As Getjan puts it: “Tourism & Event Management students can prepare themselves!”